Andy (Nadgedzi) Everson, born in Comox, British Columbia in 1972, was named by his grandfather, the late Chief Andy Frank of the K’ómoks First Nation. His grandmother greatly influenced Andy who has always upheld the traditions of both the K’ómoks and Kwakwa̱ka̱’wakw First Nations.

Andy holds a Master’s degree in Anthropology. Since the land of the K’ómoks Nation lies between the larger Salish and Kwakwa̱ka̱’wakw territories, his thesis focused on notions and expressions of contemporary K’ómoks identity. Through his studies in anthropology, Andy acquired a background in linguistics. This subsequently inspired him to create a company, Copper Canoe Inc., specializing in the creation of aboriginal language media.

Andy began drawing at an early age, and his artistic career started in 1990, designing and painted chilkat-style blankets for use in potlatch dancing. Andy creates contemporary bold and unique imagery that remains rooted in the traditions of his ancestors. This is true of his designs of Star Wars characters that he has printed since 2011. They have grown in numbers and popularity ever since.

In 2006, the British Columbia Lions Society invited Andy to paint a bear for the Spirit Bears project, whose objective was to raise money for the Society’s Easter Seal Services, and the Vancouver Canucks For Kids Fund. Andy’s Healing Spirit bear was adorned in clothing reminiscent of the chilkat weaving tradition and befitting nobility.

Everson also works on collaborative projects. He illustrated the book titled I am Raven of Canadian Métis David Bouchard. I am Raven explores the world of animal spirit guide, and won the 2008 Moonbeam Children’s Book Awards Gold Medal for best Multicultural Picture Book.

Other collaborations include working Canadian designer Sabina Hill, known for limited edition furniture and custom art installations. For her Dwell Collection, Andy created the Salmon Trout’s Head design of the Ovoid coffee and side tables as well as the Bear design for the wall panel. Andy’s Thunderbird design also adorns the walnut and leather chair of Sabina Hill’s Harvest Collection.

Andy‘s collaboration with Sabina extends to private and corporate commissions such as the Eagle and Whale partition screens, made of laser cut bronze anodized aluminum and hand-sanded glass, and the four metal and wood panel installations at the Four Points Sheraton Hotel, in Victoria gateway.

Andy performs traditional songs and ceremonial dances at potlatches. He is also a member of the Le-La-La, the Gwa’wina and the K’umugwe dance groups. 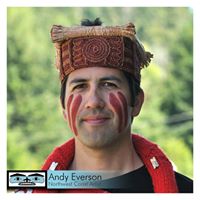