In 2010, Angela’s set of Four Elements Healing Rattles – Earth, Wind, Fire and Water – was exhibited in SMASH: International Indigenous Weaving, at the Art Gallery of Greater Victoria. These rattles were also part of the touring exhibition Record, (Re(create): Contemporary Coast Salish Art of the Salish Weave Collection. Curated by Toby Lawrence, and organized by the Art Gallery of Greater Victoria, the exhibition travelled to the Reach Gallery in Abbotsford, BC in 2014, and to the Nanaimo Art Gallery and the Comox Valley Art Gallery in 2015. The set of Four Elements Healing Rattles now resides at the National Gallery of Canada.

In 2015 and 2016, Angela was part of a collective of Coast Salish artists who curated Out of the Frame: Salish Printmaking in collaboration with curator Andrea Walsh. The approach took prints out of commercial, critical and collector frames, and literally out of physical frames. The signature piece of this exhibition is a collaboration of the artists with world renowned master printmaker Andy McDougall, also director of Wachiay Studio in Courtenay, BC. Out of the Frame is an installation of eight designs printed on overlaid Mylar and fabric panels. Angela’s piece, Change is Constant, is inspired by the concepts that the only constant in life is change, and that to accept change is much like how water behaves, shifting and changing as it moves and flows through space.

The Canada Council for the Arts and the First Peoples Cultural Council of British Columbia have recognized Angela’s artistic contribution to her Coast Salish culture. Her work is in many private and public collections, including the permanent collections of the Canadian Museum of History and the National Gallery of Canada.

A multi-talented and accomplished artist, Angela designs and paints silk scarves. Her interest in fashion design led to the creation of a line of ties and scarves for the Vancouver International Airport staff. She has published several silkscreen prints and, interested in the use of Coast Salish traditional medicine, Angela collects plants to make soap and lotion for people with sensitive skin. 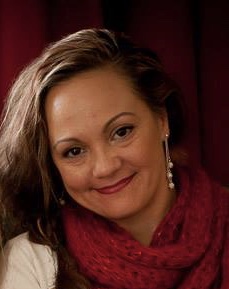