Born near Victoria, British Columbia in 1969, Chris is as a member of the T’sartlip nation. He was immersed in Coast Salish art as a child, and was mentored by his uncle, Salish artist Charles Elliott. He also completed one year of training at the Gitanmaax School of Northwest Coast Art in ‘Ksan, and a two-year apprenticeship under Tsimshian artist, Roy Henry Vickers.

Chris’ artwork often depicts flora and fauna of his Vancouver Island homeland, as well as the mythologies of his culture. His designs are rendered as carvings, paintings, glass works, and limited edition prints.

In 2007, the Sidney Pier Hotel and Spa commissioned works of glass from Chris. He created three large-scale etched glass panels for the hotel lobby, and smaller panels for each of its 55 rooms. Chris gained further exposure through the hit television series Grey’s Anatomy in which some of his prints were featured.

The rendering of his Salish Sea design on metal, canvas and paper are well known to the public. The large metal panel located near the ocean in Oak Bay is the background of photographs taken by residents and international visitors alike.  This large panel was part of the Out of the Frame exhibition presented by the University of Victoria Legacy Gallery Downtown in the summer of 2016. Chris was one of eight Coast Salish artists who curated the exhibition in collaboration with visual anthropologist and curator, Andrea Walsh. Sweet Talk is the design created by Chris for the collective installation Out of the Frame, the signature piece of the exhibition.

An important facet of Paul’s career is teaching and mentoring. Starting at home, he taught his children Sage, Liam and Cosiniye (pronounced Kwa-sea-knee-ah) the traditional Coast Salish art style. He has taught in local schools and given design and carving workshops in his studio.

In 2010, Chris was the first Salish artist invited to participate in the Visiting Artist Program in Anthropology, at the Faculty of Social Sciences of the University of Victoria. In 2015 and 2016, joined the teaching team of the Indigenous Education Department as the artist in residence of its Summer Institute programs. All students learned of the traditional Coast Salish design elements and, under Chris’ guidance, created their own Salish designs. In 2015, students learned to make drums from hide, as well as to transfer and paint their designs onto the drums. Students of the 2016 Institute learned printmaking techniques and made silkscreen prints. 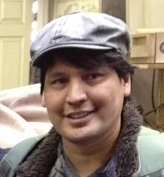