Dylan (Qwul’thilum) Thomas was born in Victoria, British Columbia in 1986. He is a member of the Lyackson First Nation, whose traditional territory is Valdes Island, one of the Gulf Islands of the Salish Sea.

Dylan’s family upheld the Coast Salish culture and traditions and immersed him into the art of his ancestors at a young age. At the beginning of his career, he learned jewelry design and making with the late artist Seletze (also known as Delmar Johnnie) and apprenticed with renowned Kwakwaka’wakw artist, Rande Cook, to perfect design techniques and work with different media.

Famed artists – Coast Salish Susan Point, Haida Robert Davidson, and late Arthur Thompson of Nuu-chah-nulth and Coast Salish ancestry – inspired Dylan’s first creations. Fuelled by curiosity and love of reading, Dylan explored mathematics and the geometry of nature and studied artifacts and designs of different civilizations, including Salish whorls and the geometry of their design.

lessLIE, a Coast Salish artist himself, noticed Dylan’s graphic designs work, and invited him to participate in the 2013 exhibition Urban Thunderbirds – Ravens in a Material World he co-curated with Kwakwa̱ka̱’wakw artist Rande Cook and Nicole Stanbridge of the Art Gallery of Greater Victoria. Dylan skillfully used inspiration from the mandala and mosaic designs and influences from famous graphic artist, Escher, to create contemporary works harboring traditional Salish design elements.

In August 2016, the Alcheringa Gallery of Victoria, BC, presented Sacred Geometry, Dylan’s first solo exhibition. The many sculptural works, paintings, and prints exhibited by Dylan revealed new heights of his cultivated and distinct artistry.

Besides his artistic practice, Dylan is studying English and Creative Writing at the University of Victoria. 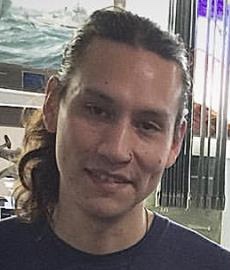