Coast Salish carver John Marston (Qap’u’luq) was born in 1978 in Ladysmith, British Columbia. His parents David and Jane Marston, both carvers, were his first teachers and John picked up a carving knife at the age of eight.

John was mentored by the late Coast Salish carver Simon Charlie who taught him the legends of the Coast Salish people. In his early twenties, John immersed himself in carving and joined his brother Luke at the Thunderbird Park at the Royal British Columbia Museum in Victoria. During the first four years, he volunteered his services, earning the resident carver position for the fifth year of his stay. In this last year, he refined his artwork alongside talented Northwest Coast carvers such as Silas Coon, Shawn Karpes, Gary Peterson, and Wayne Young.

His career has also been shaped by research into old Coast Salish art and traditions, careful study of museum collections, travel, and cultural exchanges. In the spring of 2006, John embarked on a cross-cultural exchange to Papua New Guinea. This experience was captured in a documentary film titled Killerwhale and Crocodile and broadcasted on the Bravo channel. John met and worked with New-Guinean carvers, principally with Teddy Belangu who visited British Columbia. The sharing of culture, traditions, and skills inspired the design of ‘ehhwe’p syuth (To Share History), the most significant sculpture John ever crafted.

In 2007, John and Luke traveled to Japan. This exchange with Japanese artists was the subject of two television programs broadcast widely in Canada and Japan. In 2009, John was honored with the British Columbia Creative Achievement Award for Aboriginal Art. Later that year, he participated in the international exhibition Hailans to Ailans.

John’s work is part of public and private collections worldwide and is exhibited at the Museum of Anthropology in Vancouver, at the Vancouver International Airport and the Vancouver Convention Centre. 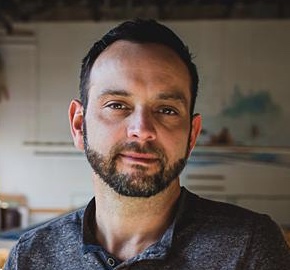