Stan Greene was born in Mission, British Columbia in 1953. He is from Sto:lo (Fraser Valley), Semiahmoo (White Rock) and Niimíipu (Nez Perce from the Columbia River Plateau). Sto:lo means People of the River in the Halkomelem language.

At the age of 13, inspired by his grandfather’s collection of carvings, Stan began carving. In 1976-77, he attended the Gitanmaax School of Northwest Coast Indian Art and Design at K’san in Hazelton, BC. There, he learned Tsimshian design and carving techniques under the tutelage of master carvers such as Ken Mowatt and Chuck Heit.

However, Stan is self-taught in the Salish art form. He conducted his own research, studying old pieces at the Museum of Anthropology of the University of British Columbia, and questioning Elders of his community.

In 1978, at the age of twenty-five, drawing inspiration from the designs of carved spindle whorls, Stan produced his first two limited editions of Salish prints, Human and Thunderbird and Man with Wolves. These prints are the first prints designed in the traditional Salish style and marketed as such on the Northwest Coast.

Stan carves in both Tsimshian and Salish styles. In 1986, he exhibited two large Salish house posts at the 1986 World Expo in Vancouver, BC. In 1987, he carved a 27-foot totem pole and travelled to Japan where his pole was raised in the Kanazawa Park of Yokohama City. He also exhibited his work at the 1994 Commonwealth Games held in Victoria, British Columbia.

In 2005, Stan’s work was featured in the Changing Hands: Art Without Reservation 2 exhibition at the Museum of Art and Design in New York. Two years later, in recognition for his efforts to revive and pioneer the Salish art style, he received an Honorary Doctorate from the University of the Fraser Valley.

Stan Greene now lives in Chilliwack, BC. He is a respected and well established contemporary Salish artist. 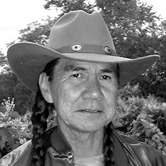