Born in 1952, Susan Point is a Coast Salish artist from the Musqueam First Nation in Vancouver, B.C. Susan learned the traditional values of her culture and the legends of her people from her late mother, Edna Grant-Point and her late uncle, Dominic Point.

Susan began her artistic career in January 1981 designing and creating jewelry. At that time, Coast Salish art was not as well-known as other First Nations formline-based art of the northwest coast. Eager to learn more about Salish art form, Susan researched Salish works in museums and libraries in Canada and the USA, and consulted with her uncle Michael Kew, anthropologist and professor at the University of British Columbia. She also came across screen-prints by Salish artist Stan Greene who was inspired by the traditional Salish spindle whorl. In April of 1981, she produced her first silk-screen print, Salmon.

Susan has been instrumental in the renaissance of Coast Salish art both in Canada and the United States. She renders designs reminiscent of traditional images such as that of the spindle whorl, and uses non-traditional materials and techniques in a variety of media: paper, glass, bronze, wood, concrete, polymer, stainless steel, and cast iron. She was the first indigenous artist of the northwest coast to use glass, an untraditional medium at the time.

Susan has been awarded numerous public art commissions. Her trademark work adorns the Vancouver International Airport, the Museum of Anthropology at the University of British Columbia, the Convention Center and Stanley Park in Vancouver, the National Museum of the American Indian at the Smithsonian Institute in Washington, D.C.

In early 2017, the solo exhibition Susan Point: Spindle Whorl at the Vancouver Art Gallery is a landmark in Susan’s career of nearly four decades. This retrospective exhibition features over 100 works, many of them newly created specifically for this exhibition. Susan Point is a world renown Coast Salish artist who, as stated by the Vancouver Art Gallery, “has received wide acclaim for her accomplished and remarkably wide-ranging oeuvre that forcefully asserts the vitality of Coast Salish culture, both past and present”.

Several museums and galleries of the United States and Canada hold Susan’s fine artworks in their collection, including the National Gallery of Canada.

Susan has been awarded the Order of Canada, a National Aboriginal Achievement Award, a YWCA Woman of Distinction Award, and a BC Creative Achievement Award. She was appointed to the Royal Academy of Arts and elected to the International Women’s Forum. She holds Honorary Doctorates from the University of Victoria, Simon Fraser University, the University of British Columbia and the Emily Carr Institute of Art and Design. 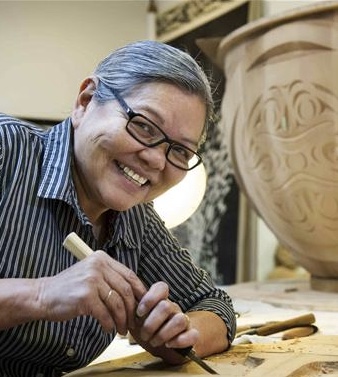