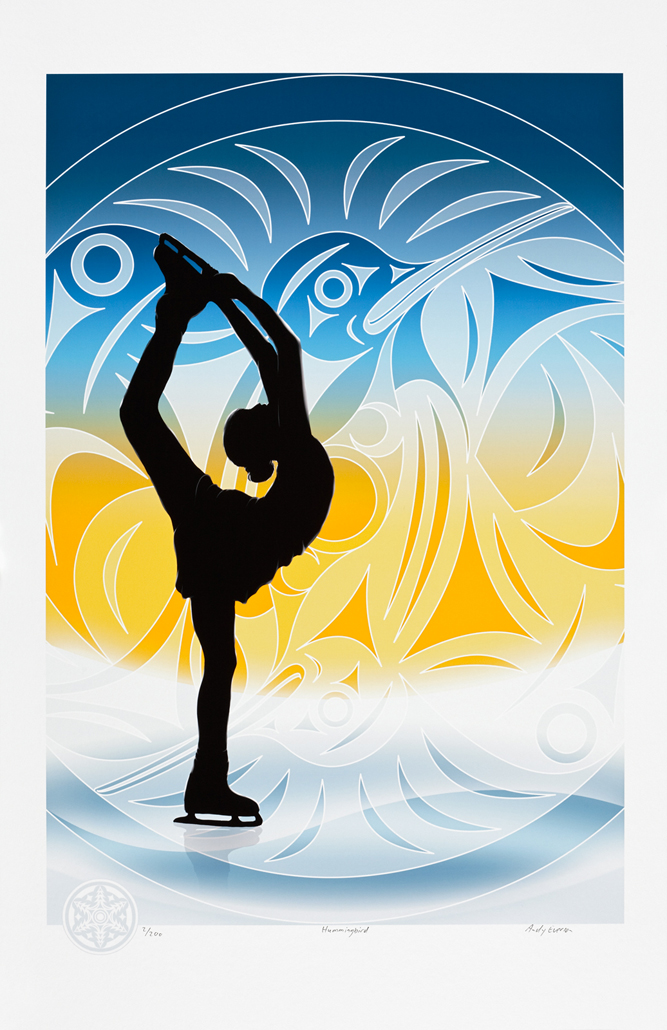 The Spirits of Snow & Ice Collection of ten limted edition serigraphs pays homage to the winter sports that take place in my hometown and all over much of British Columbia. The prints in this series bring together the four worlds present in our First Nations belief structure: the sky world represented by the dawning of a new day; the land world to which all the athletes in these images belong; the sea world evoked through the frozen waves of snow and ice; the spirit world guiding the athletes and giving them the characteristics of our sacred animals. The background image of the animals is done in respect of my Coast Salish ancestry and represents a spindle whorl design. The spindle whorl, I feel, is the perfect metaphor for weaving together our worlds.

Hummingbird
Few things can compare to witnessing a hummingbird come into view. The low hum of their wings gives you the first inclination that they are about. Their iridescent feathers shine in the sun as they move to extract nectar from flower after flower. Beating their wings at an incredible rate, they float and hover in one place. The grace of their movement, however, belies the rapid pace of their wings. Before you have a chance to truly admire them, though, they are gone.

Singles figure skaters are also a treat to witness. With a few short strokes on the ice, they quickly get up to speed. Their sequined outfits reflect the bright lights of the arena as they start their routines, practiced countless times before competition. They spin in a blur and jump so high that they seem to hover. While on the inside they may be racked with nerves, their demeanor is nothing but calm and grace.