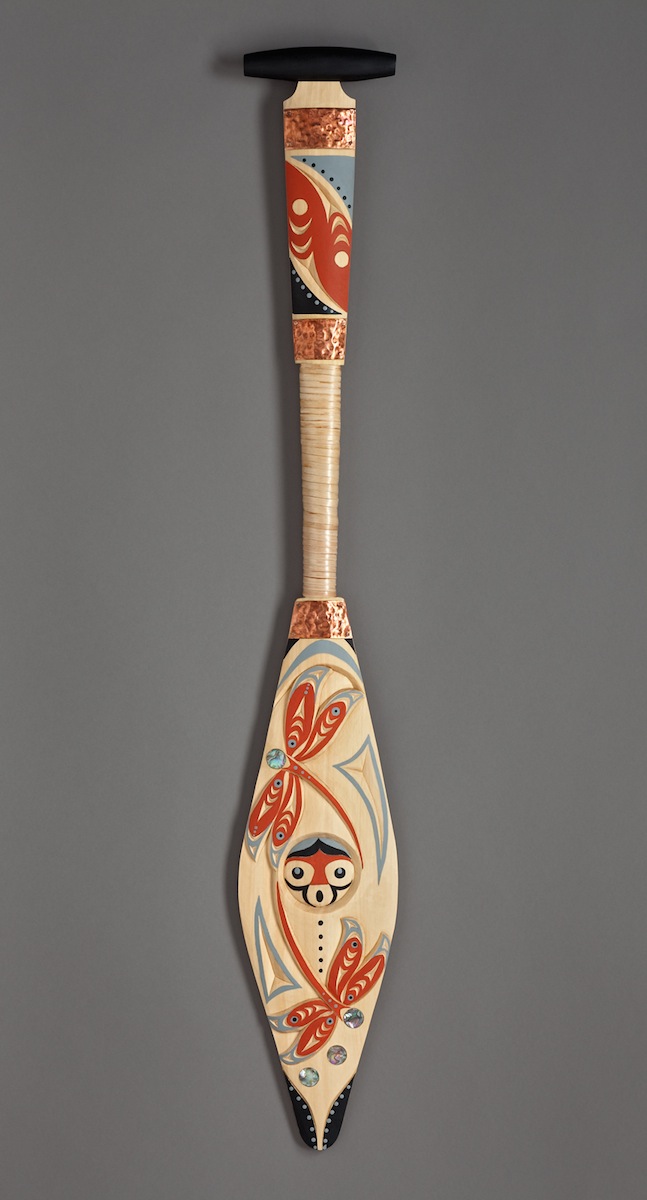 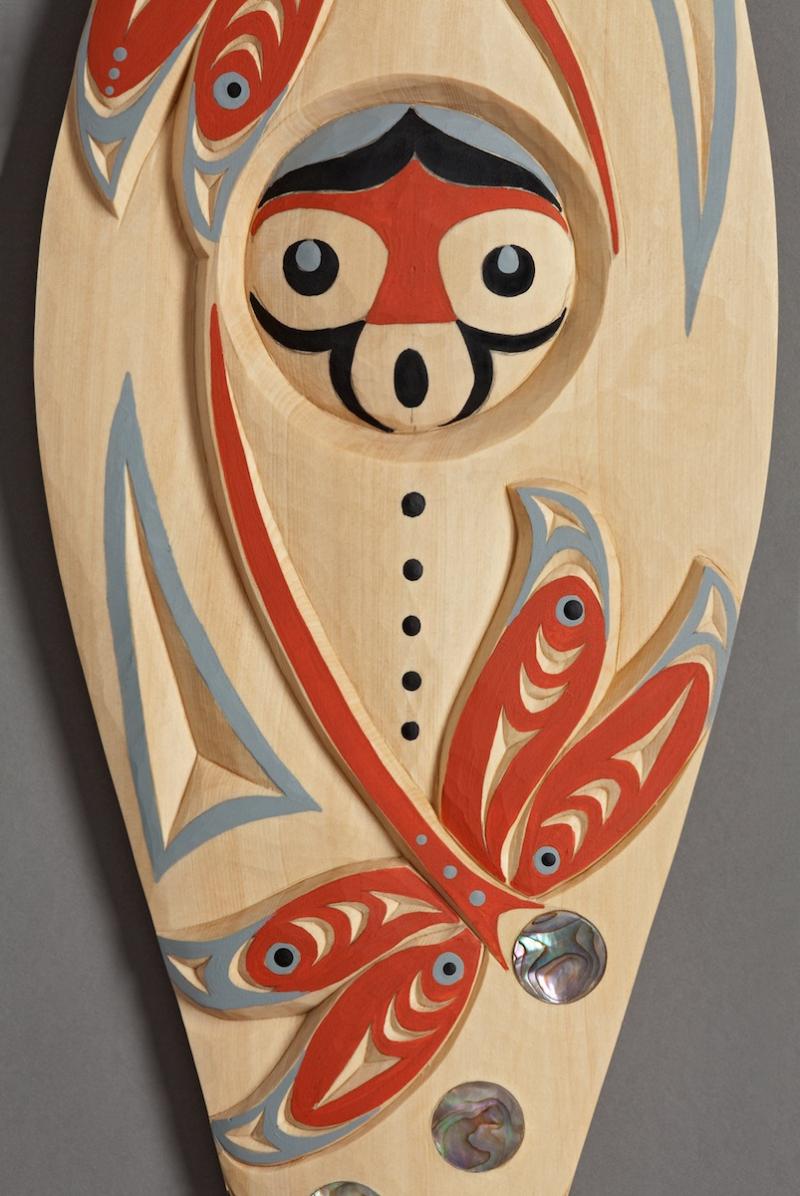 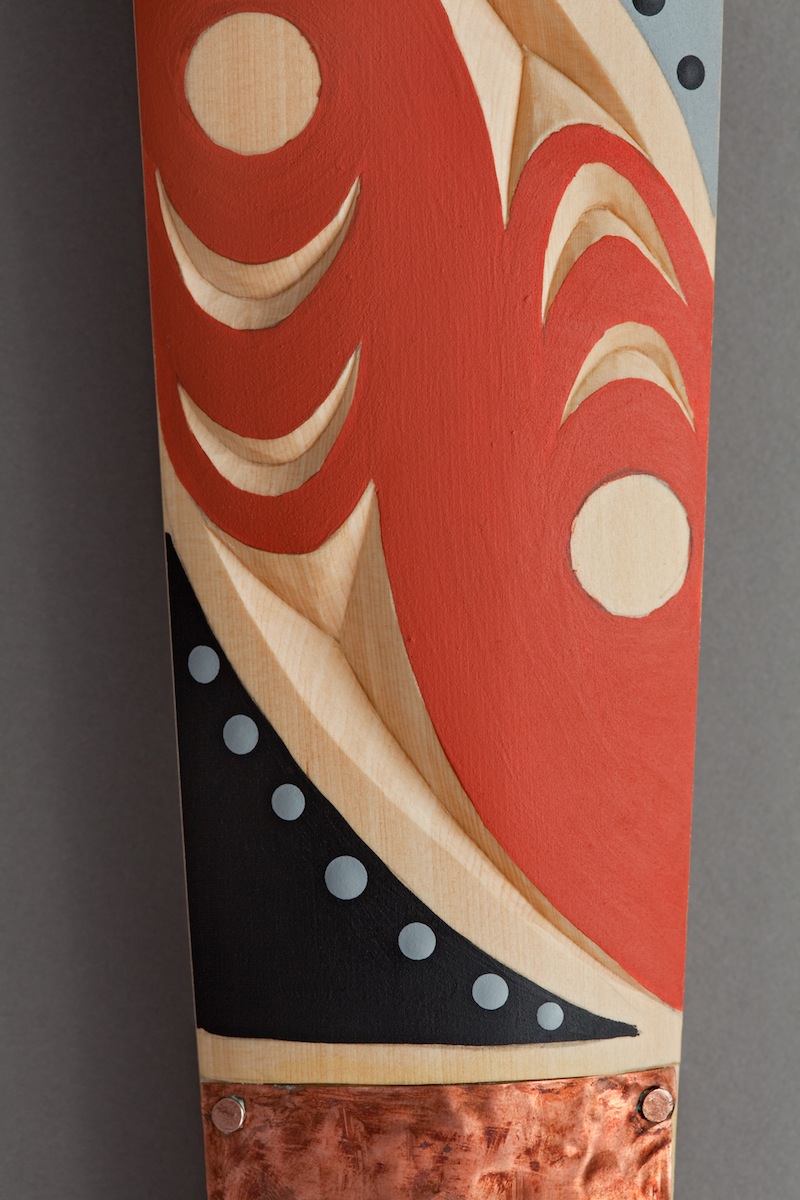 The information about the Root Paddle comes from my Great-Great Grandmother, Hwal lee qul lut. Root paddles were used for digging roots. They were also used for pulling the canoe, or branches towards one self. They were usually made of a hard wood like yew wood. If they were made of a softer wood it had to be set over a fire to harden. The Grandmothers are the ones who pass the knowledge of the plants to the youth.

Hwal lee qul lut always packed a small wooden paddle about 3-feet long. It was made out of yellow cedar and had the point burnt to make it stronger. She used it to dig for edible roots, medicine roots and she even used it to dig for the occasional clam. However after she got it wet digging for clams she had to put it in the fire again to harden the end. She used the handle to pull branches close to her so she could peel certain barks off the branch for medicine. The handle was usually longer and fit into her hand nicely.

Hwal lee qul lut took her paddle wherever she went. She had three paddles some with smaller blades, different designs and one made out of yew wood. She said yew wood was the strongest. Great-Great Grandma talked to her paddles, she said they were her companions and must be treated with respect. My mom asked her where she got her paddles and she said a carver made them for her. She giggled and said she kept him busy because she used so many of them.

Root paddles were used many years ago by my relatives, the Coast Salish people. We have not seen these paddles used for a long time. The modern shovel and axe have replaced our wooden root digging paddles. It is nice to remember and recreate traditional tools. It is like honouring Great-Grandmothers’ teachings.

The Red Dragonfly Root Paddle was inspired during the summer on a hot day. While I was walking around with my daughters there were red dragonflies swarming around us in little clusters. They came and hovered right in front of me almost forcing me to see them. I am interested in these gorgeous little creatures partly because of the brilliant colour but also these particular ones bite. They hold a beautiful essence about them but also let you know they will hold their ground. The blue ones can crawl around on your finger but if a red one gets on your finger it just might bite you. The dragonfly is similar to the hummingbird with fleeting and quick movements. Red is considered a power and protective colour. Dragonflies are transformers - they grow in water and live on the land and move through the air. They hover right in front of you and then with the blink of an eye they are gone. They are a powerful spirit helper to have.